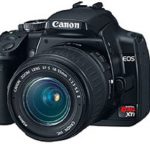 Canon’s EOS Digital Rebel XT model – the camera that set all time sales records for digital SLRs of any persuasion (supplanting the original Digital Rebel’s claim to that title) – now takes its place alongside of the newest member of the irrepressible Rebel clan: the 10.1 megapixel EOS Digital Rebel XTi SLR camera. For 16 years, the Rebel brand has stood for advanced, sophisticated and easy-to-use. The new Canon EOS Digital Rebel XTi camera continues that legacy, taking discriminating photo hobbyists, enthusiasts, advanced amateurs and SLR aficionados to places digital dreams are made of…and more economically than ever before.

“The EOS Digital Rebel XTi camera continues to lead the way with impressive innovations and an array of advancements simply not found on other digital SLRs in the sub-$1,000 price-range,” stated Yukiaki Hashimoto, senior vice president and general manager of the consumer imaging group at Canon USA, Inc. “Canon technology is born of inspiration, imagination and our passion to help photographers make the best pictures possible. Nowhere is the combination of undeniable quality and value more evident than on this new EOS Digital Rebel XTi camera.”

No mere intermediate upgrade, this new EOS Digital Rebel XTi SLR continues Canon’s combination of imaging excellence, intuitive ease of use and affordability. Indeed the EOS XTi Digital SLR camera now leads the Digital Rebel revolution with such marquee features as its higher 10.1 megapixel resolution; refined and redesigned Canon CMOS sensor; larger, easier to read 2.5 inch display screen (along with simplified and streamlined menu navigation), and the remarkable EOS Integrated Cleaning System, a self-cleaning image sensor unit/dust removal system that is available on no other camera of any make, at any price.

Despite the addition of these and other imaging improvements – including Canon’s fast, high-precision 9-point autofocus system and a new maximum burst rate in large/fine and raw quality modes that – at three frames per second – is double the capability of the Digital Rebel XT SLR, The EOS Digital Rebel XTi SLR makes its debut at a price point that is $100 less than its top-selling sibling was at its introduction and hundreds of dollars less than other SLR cameras and camera kits in its class.

Beautiful, high-res images marred by the presence of ugly high-res dust spots can be cause for painstaking, time consuming photo retouching (with varying degrees of success). Canon takes the quest for imaging excellence and easier camera maintenance a unified giant step forward with its new, two-tiered dust removal technology called the EOS Integrated Cleaning System, available only on the EOS Rebel XTi camera.

While real world shooting rarely achieves “clean-room” standards, Canon has gone out of its way to design the XTi model to first create or attract no dust. Canon begins by minimizing the dust and particles created by the camera itself, by reformulating the materials used in the body cap and shutter to materials more resistant to particle “fall out” due to normal use and wear. Canon also treats the camera’s low pass filter with an anti-static charge to prevent static-charged dust from adhering to it.

Still, recognizing that humidity and a variety of real world conditions can cause dust to enter and adhere to the sensor or low pass filter despite the most scrupulous of efforts, Canon created the Self Cleaning Sensor Unit. The low pass filter on the front of the CMOS sensor is attached to an ultrasonic vibrating unit that literally shakes the loose dust particles off of the surface. The newly liberated dust is then captured by an adhesive material that keeps the particles from becoming airborne again once the camera moves.

The self cleaning sensor unit’s ultrasonic anti-dust shake activates automatically for one second whenever the camera is powered on or off, ensuring that the camera will be as relatively dust free as possible and can be activated at other times through a simple menu selection.